A recent survey found that 17% of people were very confident about having enough money to live comfortably through their retirement years. At the same time, 36% were not confident.¹

Congress in 2001 passed a law that can help older workers make up for lost time. But few may understand how this generous offer can add up over time.²

The “catch-up” provision allows workers who are over age 50 to make contributions to their qualified retirement plans in excess of the limits imposed on younger workers.

Setting aside an extra $6,000 each year into a tax-deferred retirement account has the potential to make a big difference in the eventual balance of the account. And, by extension, in the eventual income the account may generate. (See accompanying illustration.)

Catch-Up Contributions and the Bottom Line

Upon reaching retirement at age 67, both accounts begin making payments of $4,000 a month.

The hypothetical account without catch-up contributions will be exhausted by the time its beneficiary reaches age 83. 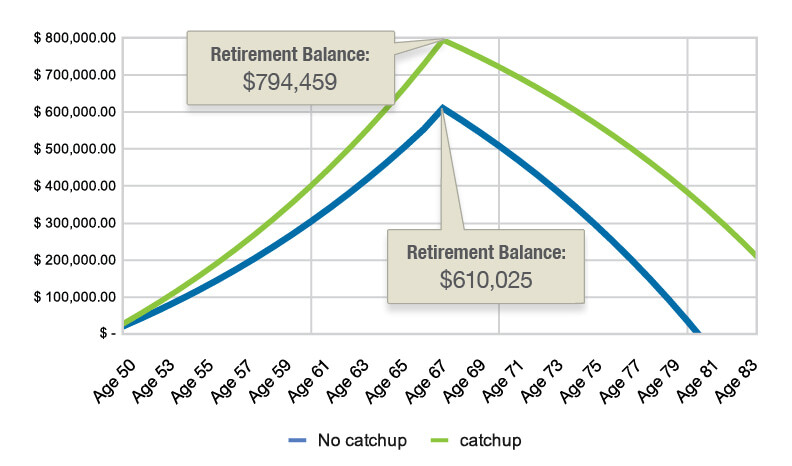 This hypothetical example is used for comparison purposes and is not intended to represent the past or future performance of any investment. Fees and other expenses were not considered in the illustration. Actual returns will fluctuate.

Distributions from 401(k) plans and most other employer-sponsored retirement plans are taxed as ordinary income and, if taken before age 59½, may be subject to a 10% federal income tax penalty. Generally, once you reach age 70½, you must begin taking required minimum distributions.